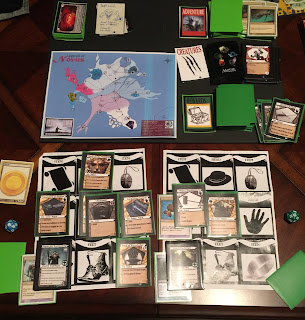 Did some additional personal playtesting utilizing the Map and the new 3 round combat rule with d20 dice for determining whether the character wins or loses the round.  The map helped speed up the game by creating alternative ways to earn XP, and helping define a path to higher level creatures in the later points of the game.
The cool thing about the map is having control over your direction, and you game strategy.  Still some ideas to add in to the lands themselves to add variety and thought into the game, but the path seems right.

Now I am working on creating Drive Thru Card files to be able to eventually get all cards printed professionally, trying to get them made in time for the BGDL contest.  They will want a fully functional prototype game, and I think it will look better with true cards instead of sleeved cards as the backs and the game setup go a long way in the look/feel of a prototype game.

First I have to get passed round 1 and 2 of game cuts though, so I still have to make a professional map board (via staples for now) and some map tokens (crokinole chips with icons on them?)

Lots to do in May to prep for June if it works out!