In this fantastic game design hobby I now invest so much time into, its always fun to learn new skills or tricks.
Today was no exception.  I was worried when I saw a few game KS pages that people had some crazy time on their hands and some mad skills to make GIFs look like videos.  Cards flying back and forth, images swirling around the screen.  It was baffling to me how they made this happen.
Then I discovered that there are video to GIF converters!  I mean, that is so much easier than trying to take fifty shots with slightly different images to create the perception of animation.  With a video to GIF conversion it just basically freeze frames to do it all for you.
There is even a website that automates the process, I was thrilled to see it!
Now I have not tested it with long videos, but the image below is a simple example of an After Effects MP4 I put together quickly just to flip a card from a deck.  Its not perfect, but the concept is there.

The website is https://ezgif.com/video-to-gif.  If you are looking for an animation solution for a KS image this might be it...

The day has come, all of the decks/games ordered by backers for Duel of the Dragons arrived to my doorstep.
With this being a very minor campaign, IE only 82 backers and of those only 60 pledged for a physical product, the easiest method was to package/ship personally.
The decks came from DriveThru Cards, as did the tuckboxes.  The special Holographic cards were ordered separately from MakePlayingCards.com, as DTC does not offer special finishes such as holographics.
The arrival of the decks, on Fri Nov 23rd, means that I had time to package them and prepare to ship them out on Mon Nov 26th, and hopefully live up to my timeline of getting the product to the backers before Dec 25th 2018.
I am looking forward to getting these sent out, and hopefully hearing back from fellow gamers about their thoughts on the game and perhaps some pics and gameplay reviews (above and beyond the playtests done for it).
No matter what comes of the decks, and the future of Duel of the Dragons, it has provided FunDaMental Games with the credit of a backed/funded KS project that communicated well to backers, responded to all questions, and delivered the promised product within the timeline given.  When it comes to promoting a future game, those three things will be a critical discussion point and help develop a stronger trust as it is not a game from a "First Time Creator".

A special thanks to all of those who did a Print and Play, and those who backed this game without playing it.  It was a great learning experience from many aspects, such as KS, Social Media, Advertising, Manufacturing, and Shipping.  I would highly recommend anyone trying to get into the boardgame development and fulfillment hobby / business to start with a very small project with this in order to gain some of this experience. 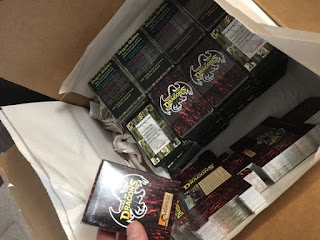 Planning for a KS video is a critical part of a campaign's impulse backers.
There will be many people who don't even watch the video and decide whether or not to back, but there is a always a chance that a few hundred backers won't even read the campaign page if the KS video does not look properly done or have key information in it.

For Duel of the Dragons I completed the video myself.  It is very amateurish, the timing was not great, and the special effects were jarring in some cases.  The voice over was done voluntarily by a game designer peer, which I am thankful for but was still not right for the game now that I look back on it.

So for Legends of Novus I need to spend money on someone with more time and talent than I have in the video/animation field.  I have decided to go with someone very local, only about an hour and fifteen minutes away, called Onewolf.  They have some great videos online, have created several KS videos that have had successful campaigns, and the main contact is a fellow game designer who created Tiny Ninjas (funded for $40k earlier this year).

My job is to create the story board and script, then work with them on seeing how it flows, providing images they can manipulate to seem like animations, and hopefully tack on a live video snippet near the end about my part in the project and enthusiasm for the game.

I have a good feeling about this decision, costly as it may be, as it could sway a hundred backers to choose to support this game, and by having another hundred backers just from the video those backers give reason for other people to think twice about the campaign and say … hey, that game has over 200 backers, maybe I should check it out also.

The expense will be incorporated into the costs of the game, much like any other production cost, so provided the game does fund this will be covered by the low profit lines of the game.

Here is a brief video using After Effects that I used to create my video storyboard, and I look forward to seeing Onewolf make it fifty times better over the coming months!

After spending several weeks redoing every single card in Legends of Novus, as well as the game board and a complete retype/graphics change of the rules I figured it was time to reinvest in the digital world of tabletop gaming again.
The benefits of a digital boardgame are numerous, just a few examples are:

So it is live again, and I've put out some video examples and began seeking feedback from game testers to see if anyone felt like looking at it.  Hoping a few people take interest as it can truly help work out issues and problems that I have not foreseen, or have not experienced in live playtesting yet.

Below is a sample PNG that is used to layer over the card file prior to uploading to TTS.  Intriguing process, and does not work in CMYK so all images must be RGB (at least it crashed for me every time I tried CMYK). 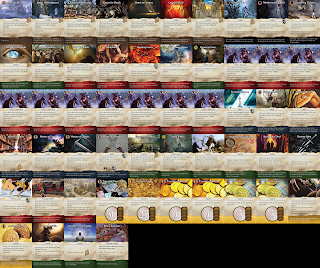 Trying to become a visible and active member of such an incredible community as the hobby tabletop gaming community is a bit intimidating to a newcomer.
There are some very clearly known names in the industry, particularly the social aspect of the world, that I am seeing.  Some names include...

But there are so many out there and I have no idea how many games they have made or what their full impact on the community has been.
What I do know is that if I plan to gain some awareness and followers I need to do my part to keep interacting with others without a goal to gain their business.  Its about creating trust, friendship, and understanding that I am here to help them enjoy the hobby and develop their games as well.
Recently I have been playing prototype games of other designers for fun (examples are Necromagis and H.E.R.O.  by Chris Miles and G. Wesley Cone respectively).  Their games were simple to play as they are just card games, but it still took time, energy, and some money for printing to do this.
Giving them feedback and suggestions hopefully will help improve their future games.

I have also participated in a few rules review exchanges.  Basically I post my rules for anyone interested to review and critique, and in return I promise to read their rules and do the same.  This was pretty challenging the last time as six people read my rules front to back, which means I had to read six peoples rules and do likewise.  This is a hard thing to do when you really just want to focus on completing your own game.  But it was important, as their feedback did help me improve my game so I needed to reciprocate.  One rules review I did took over an hour!

And most recently, as a way to carve my own name and involvement into the gaming community and promote my favourite types of settings and games, I have created a new free for all facebook group called Fantasy Tabletop Companions.  It is a group that is just there to talk about our favorite fantasy games, share stories and ideas, and allow others to promote their prototype games and kickstarters to fantasy fans.

After two days the group has 80 members, and I hope that will continue to grow over the rest of the year so I can learn and see more from the great members that have joined.  There is the potential that it will create an active audience for some fantasy games I plan on brining to life in the coming years, but the goal is not to push that on the group daily.

Hope it grows into a large group of fantasy superfans! 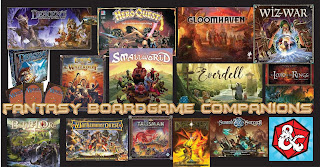 When it comes to making a game easy to play it is always best to either play in the mindset of a new player, or play with a group of new players without instructing them on how to play your game.

With Legends of Novus I had thought I had my Location resource guide was setup well to understand where to go without too much difficulty.  Turns out I was wrong.  Issues found were:

Hope it helps solve the concerns below... 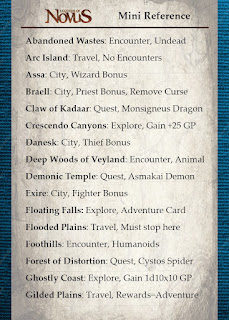 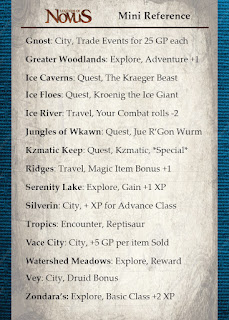