I have read and heard that no game is ever truly complete, it just gets created at a point in time when the designer/producer are satisfied that they have a product that delivers the gaming experience they wanted to share.
There are always new images, designs, components, and mechanics that can be introduced to improve or alter the game.  In Legends of Novus the possibilities are endless as to what could change to improve the interface and player experience, such as:

Since I am completing LoN as the only designer for FunDaMental Games, I have to decide which improvements or changes are worth doing, and which are not.  The reasons to make these decisions have to be considered for various reasons, a short list of those are:
Working with the talented artist, Andrea Butera, has been very beneficial for graphic design, and new art content.  With his support there are many changes that will be implemented, and all with the intent improving the visual and physical interactions with components.  Each of the considerations above were thought out and the decision to change has been determined to improve the game.

See below for some new art / images for coins and standees, excited to see these new options for the game!

The GameCrafter version 2 prototypes arrived on Monday and I am loving the new look to the cards.  The board also looked much more presentable with the white text/black dropshadow.
After creating new character sheets/rules/location guides at staples it is now time to send out prototypes to previewers/reviewers!

As of right now there will be one copy going the The Bearded Meeple, in London, Ontario, Canada and another copy going to We're Not Wizards over in Scotland.

The hope is that these couple of avid game players may enjoy their initial plays of Legends of Novus, and be willing to give it a positive video to help raise awareness for the game pre-KS and during KS.
Here is a screen shots of the newest game: 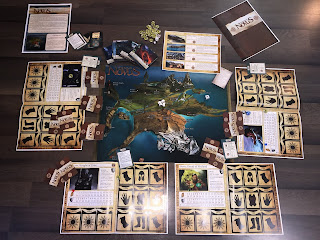 One of the common things I see in every successful KS campaign is having links to external information.
There is only so many images and words that you can (or want) to put directly on your KS page.  Much of the info you provide most people may just skim over or click out of anyhow, so don't waste their time making a mile long KS page if you can leave some of it out via linked images/pdfs/videos.

For Legends of Novus I really want to share as much as I can about the backstories of the characters, the creatures, and the locations.  If I put all of that into the KS campaign it would be massive, and tough to digest for those who just want to read how to play it.

So that's where links come in.  Using my website as a holding station for all of the documents I want to refer to, I was able to create images that were uniform in size and font for the KS for each character, quest creature, and region of Novus.  But I did not include any story in there, just a note that says you can click on them to learn more.  This is a strategy I saw used to good effect in the KS game "Unbroken", so thank you to Artem for that useful trick ( I am sure others have used it also, but this one stood out to me).
When someone clicks on the image or word (basically anywhere on the embedded jpeg) there is a link to a PDF that is saved on my games website.  This PDF shows the character sheet/story, quest card/story, and location story for the applicable links.

I hope that those who really want to read about the world I've created spend a few minutes reading those.  But for those that don't, at least they still see the art and names of those places and will understand some time and thought have gone into the world design.

If you aren't sure how to do these things feel free to reach out, I would be happy to help you do the same!

Here is an example of some of the Quest Creature link jpegs, and the direct link to Osira story:

What Versions to Include

Variety is the spice of life, and Options generally increases potential interest in gaming groups and across different types of people.
Deciding what type of play styles are available in your game could help reach people beyond your initial idea, and encourage you to make parts of your game slightly different in a good way.

For me that decision came when trying to figure out if Legends of Novus should be just a multiplayer competitive game, or if other play styles should be included.  After thinking about the way the game plays, and how it could be altered, I felt it could be adapted.  So then I had to look at the Pros and Cons..

PROS
- More modes means more accessibility to players, be it solo, duel, or up to five players.
- Easier to share/advertise the game across different FB sites, IG, and Reddit.  IE you cannot try to share your 2-5 player game to a solo boardgame group, or a competitive game to a Co-op group.
- Easier to get people to playtest, as some groups will only playtest certain styles of games.
- Ability to produce game cards specific to styles of play (add/remove during game setup)

CONS
- More rules are required to be printed in the rulebook, which creates additional pages (adding to cost of production and weight of shipping, even if it is minor).
- Cost of additional games cards, if created.
- Requires more playtesting than just one version.  Each version will have unique rule sets that have to be tested to see if the game is still playable in that format.
- People may interpret the game as going in too many directions, not focused enough on one game style.

There are easily more factors to add to the above lists, but the ones above are the core ones that come to mind when making the decision.  I am going to forge ahead with the four versions and see how it is accepted on FB and on KS early next year.  If it receives too much negative criticism then it will be a lesson learned and a change to make prior to a relaunch.

Better get to playtesting these different styles some more!