Recently I decided to choose a different manufacturer to create the new prototypes of Legends of Novus (for the DiceTower and Tantrum videos for KS relaunch).
I decided to move away from GameCrafter for this version for a couple of reasons:

1 - I believe it is good to experiment with different servers, and different productions.  This helps me understand differences in quality, and in tech requirements to provide files to manufacturers.  I can tell you the difference in how I submit files to PnP is much different than GC, but with some similarities.

2 - When canvassing the gaming community, PnP comes up often as a game creation tool of choice.  So as much as I enjoyed the prototypes I have done with Gamecrafter (and cards from DTC), I wanted to see what people liked more about PnP.

3 - Time... It turns out PnP had a faster turnaround time from file submission to getting your game.  For the Gamecrafter I waited about a month for my copy, with few emails/confirmations.  With PnP I had a few file check emails sent to me... by humans... and was able to correct some issues before the final print.  This showed me great customer service, and the time from production to getting my game was only 2 weeks.

Do I still like the GameCrafter?  Yes, absolutely.  They can deliver a pretty solid product with what you need.  Do I prefer PnP?  I would say yes, I believe the file creation system is simpler (for how I run my programs anyhow), and the color quality I have gotten back has been better from PnP.

Just thought I would share.  Regardless, both are expensive, but the cost is worth the feeling of getting something you created in a near final form.  I truly recommend trying this if you have a game you feel is near its final stages, that you want to playtest more formally in game clubs or such.

If you have any questions about the process just let me know, would be happy to share my experience with you. 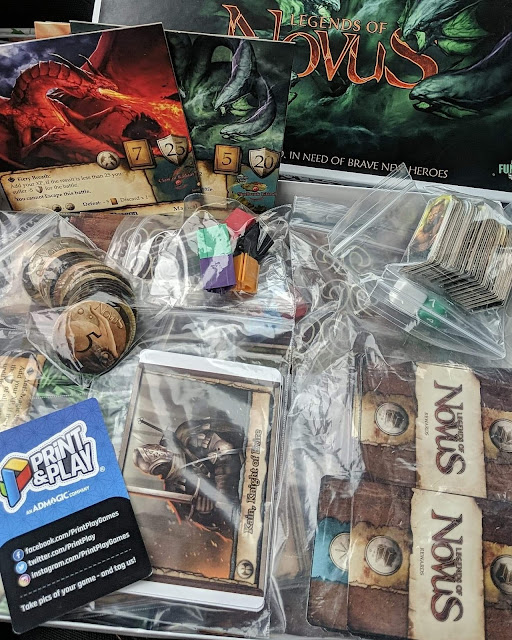 Bringing back a Prototype for a Contest

The Board Game Design Lab is running their second game design contest, and I thought it would be a good idea to enter it again.
Last year I entered Legends of Novus, however I was very much a rookie in graphic design and game design.  I am certainly no expert now, but I feel a lot has been learned this past year and figure now is as good a time as any to test that theory.
I cannot run Novus in the contest, as I plan to make it available to the public through the KS relaunch in June (and believe it will succeed this time).  But there is a game I have prototyped and tested many times that I think is worth entering into the contest...
The description I put in the rules, just in MS word, were as follows:

Spellbook'd
Take on the role of an aspiring Wizard in an Academy of Magic. Each Wizard is
building up their skills to win an upcoming contest of their skills, judged by the Council of
Archmages. Study the different schools of magic, redeem your knowledge for Magems,
and partake in a Spell Battle in your effort to become the victor of the contest!
Spellbook’d is a card drafting and dueling game involving three different game
rounds to gather cards, spells, and points to win the game. After the three different
rounds of play the Wizard with the most Spell Points is declared the winner.
2-3 players (expandable to 6 players if printed twice)
30-45 minutes playtime
Ages 12+

I enjoyed playing this every time I had the chance, and am excited to put some energy into something other than Legends of Novus.  As amazing as I feel Novus is, it can be tough to dedicate hours each and every night to a single title.  It is important to still develop Novus, as the relaunch deserves the support, but I will still take some time for Spellbook'd as well to see how it can perform.

If you are designing games I would recommend you always have a few titles in the works. One should be your primary focus, but have others in different stages so that when you want to design, and need something different, you have options to play with.

Here is an early sellsheet, still working on it, for the contest. 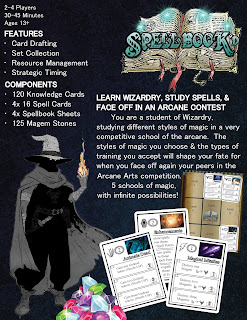 How to Prepare for a Relaunch?

It has been almost two weeks since the end of the unfunded KS campaign for Legends of Novus.  I made it very clear to the backers, and any other watchers/reviewers, that the game would be relaunched in June with some changes.
The question is... what should change, and what should stay the same?  After doing some research, inquiring to people with emails, learning new skills, and just contemplating what might work, here is what I think will be most effective:


I am sure there will be more, but those are the big ones...

SAMPLE self - created App for the game: