Well, last night I joined up with a few online facebook groups to throw the fishing line out for potential playtesters.
Thank you to the different closed groups who accepted me into their ranks!  I ended up joining the following:

I ended up placing a post in several of them showing a pic of my current game design and asking for playtesters (with a brief description of the game).  Then went to bed.

By 10am this morning there were 15 people messaging asking for a chance to try it!  That's after trying to find gamers to test it for the past two weeks on Board Game Geek site!

So I've sent the Card Page files off to them, with the Rules and some thoughts on what kind of feedback would be most helpful.  I hope they each get a chance to print and play it, enjoy it a bit, and let me know what is good, what is bad, and what is ugly!

And, since Groups seem to be so effective, I am also creating a Facebook Group for my game, just for pre-publishing feedback purposes and to help during the Kickstarter phase later on...

Hard to keep up with things when the ball starts to roll though! 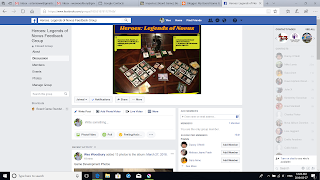