So after a few days thinking on it, and trying to figure out a fitting name for the game after the sad finding about Heroes of Kearth that was advertised on Gamecrafter, I have discovered a name I believe is fitting for this exciting game.

I still like the idea of the Heroes prefix as it allows a lot of potential down the road to expand upon this game world.  For example, if the game were successful and an expansion were created it could become Heroes: Lost Continent of Novus, or Heroes: Knights of Novus, etc etc.  Who knows what the future could bring.

Like anything else, this name could change between now and the final game release, but I like it right now and want to give it a try.  Novus is the latin term for New, representing the new world that the Maelstrom created on the planet.  The characters become Legends to the people of Novus when they have bravely travelled the new lands and defeated dangerous creatures along the way. 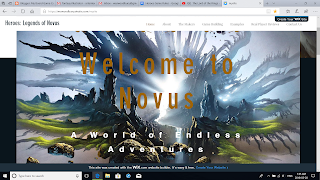