MTG fun, and some Playtesting too

Today was the paper release for MTG Masters 25, a set for Magic the Gathering that features cards from all 25 years of magics history.  I've been playing the game for over 20 years, so it was a great chance to enjoy some of the most interesting cards in a casual draft format.  There were only 6 players, but the opportunity to draft and play is always enjoyable for me.
Got lucky and opened a Chalice of the Void, an $80 value card that I was wanting for my Modern deck, so that was pretty cool also.

But the highlight of the night was after the event, having the chance to playtest my game with Lesley (store co-owner) and Shawn (friend of Lesley and regular gamer there).  The two of them had some great suggestions, and through playing the game with them I was able to get a better understanding of what some of the struggles of the game could be and take notes on how to make it more fluid.

Lesley had also tested the game last Friday and kindly made some great comments and ideas.  It was great to hear that the game was fun and interesting, even if the mechanics require some work.  A big thank you to Lesley, and Pandora's Boox & Tea, for taking an interest in my game design and letting me play the game there! 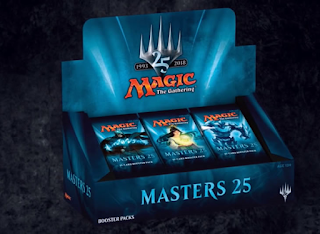