On my drive to Calgary for a meeting this week my eyes were drawn to the mountain range visible in the distance, as they always are when the skies are clear and the weather permits.  I was thinking about how the game was progressing, and what might be missing to help add to its Quality without making it too complex.
My good friend John had mentioned to me a few weeks ago that integrating story into the game would help make it more unique, and draw players into the world I've been creating.  This opened my mind to think of changing Encounter cards from being just a card with crossed swords on it, indicating a battle, to being something else entirely.
The Adventure cards are called such due to the idea that the players/characters are travelling through the world of Kearth to hunt down the creatures that have been ravaging the land and the people.  The idea to turn Encounters into locations where encounters occur helped cross the bridge between the mechanic and the story, without adding extra cards into the game (as there were already enough planned).
So now, in addition to everything else that is planned to create the game, all of the encounter cards will be altered to show different landscapes across the world.  In some cases there will be effects on Creatures, on Classes, or more generic effects to help identify with the unique lands and how they are traversed or faced.  There will still be several base encounters, and on those the lands will just be a visual representation of where the encounter takes place without any special changes.

Hopefully future game players will enjoy this aspect of the game, as it allows me to share insights into the world that would not otherwise be possible without a supplementary storybook or new set of cards.

See some examples below... 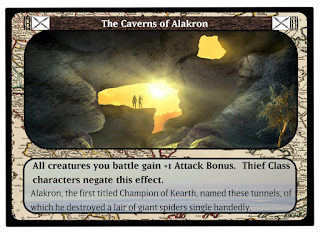 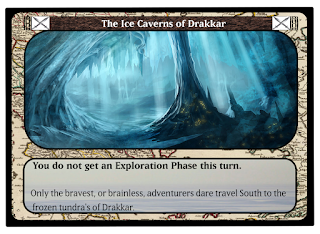 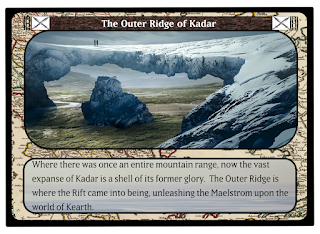 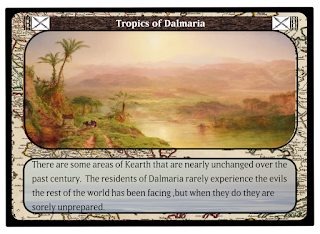