Made some big strides this week!

All game cards are now updated to latest card styles, which means they were ready for a GameCrafter print to get some REAL cards (up until this point have only played with home-printed or staples printed cards).  I am confident in the image and abilities of most cards, so felt comfortable creating a nice looking prototype to bring to game stores and show on video of the game in action.

Also, now that all images are prepared in JPEGs/PNGs in photoshop as well, I can export/download into Tabletop simulator for online playing.  I am having some troubles with crop sizes, but its late and I'm tired so I am guessing there is an easy fix to that.

Also had a game idea that is a bit more straight forward than my solo Dragon Fate game that I have been pondering.  This one would be a two player card game in the same concept as Othello, but certain cards have game changing abilities that would have to be deployed strategically to maximize their value.  I will brainstorm that one a bit more, then create a digital copy to play around with.  Could be a fun first production game, just need to add a fantasy twist to keep it inline with my Business Strategy of sticking with Fantasy! 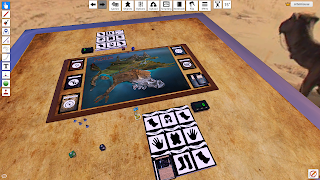