Tonight I was able to playtest my game for the first time with a person I have never met or interacted with before, which really helped test the game in a different mental space.

The playtest was completed via Tabletop Simulator, and the volunteer was a very helpful man named Michael, from the UK.  Amazing to connect with a stranger from another continent in my adventure in the boardgame community!  Thank you Board Game Designer League for helping facilitate the Discord channel that got us connected in the first place.

Connecting took a few trial and errors at first due to gameplay issues, but after about 10 minutes we were into the discussion of the game and then into turns.  He was truly blind testing as he had not read the rulebook in advance and knew nothing about the game.  That being said, it took us well over an hour to play a full game through, then have some discussion on what could change.

He provided some great insight on a few aspects of the game, some of which I think are great ideas to implement, others are possibilities but not certain yet until I test some more.  Some core changes I agree with are:

This playtest was extremely beneficial and I look forward to trying it again with someone else to see what comments are similar, or other new comments.

Like you hear in any articles or podcasts, playtest sessions like these truly help shine light into the dark and gritty corners of your game that can make it unfun (Ie rolling nothing on travel die several turns in a row).

Below is a pic of our game in action, thank you Michael! 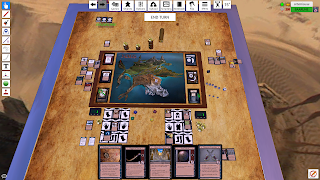