If anyone has ever played MTG you probably know what "Aggro" means.  For those that don't, its basically going all out on the offense with no time for resting and contemplating future actions.  Most well known in Red and White decks.

This week was an Aggro week for me from the moment I read about the 18 card minigame contest, and how it tethered into my goal to have a small introductory game to create a business/game designer awareness for FunDaMental Games and to develop some kind of gamer following prior to Legends of Novus release later this year.

So I spent a lot of time testing out different concepts of the game (self playtests), and then once I found a concept that seemed to make sense I busted out InDesign and went to town.  In a large game it would be better to stick to simple concepts, but with 18 cards I felt safe putting forth some more attractive visual designs.  Just put together some simple dragon icons from Photoshop and imported to InDesign, then put together the card abilities, etc.
Printed, playtested alone a bit more, then got my son into a few playtests.  He loves math, and loves analyzing potential outcomes, so it was a perfect fit for him.  We were able to play a few games together, and he also did some Solo modes (not as fun, but still entertains the mind with fantasy and math together).

Next was getting a rulebook together, and this is with constraint as well as it is limited to 4 poker sized cards front/back for the contest.  Made quite a few errors in the first rules print (had typed it up at 2am on a worknight), but after the first playtester provided their insight it was quickly corrected.

Now there are over 20 people downloading and playtesting it this week.  Whether it is good or bad, it is still amazing that so many great gamers out there are willing to take time to communicate, print, play, and provide feedback to a complete stranger for the sake of future game development.

A very busy and exciting week, with lots of development, emails, social media, etc.  And still working on Legends of Novus, my core project, in the background.  It is officially shipped from GameCrafter, so as soon as it hits the mailbox its time for an Unboxing video to share with the community! 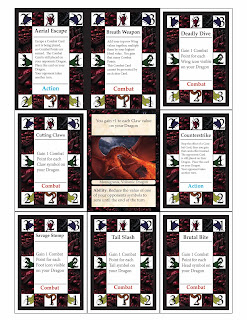 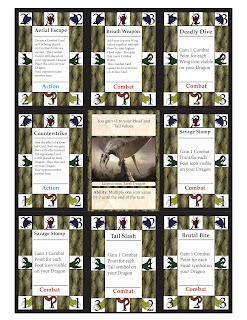