During a long drive to and from the relatives this Thanksgiving I had a lot of windshield time to think about gaming.  I thought a lot about the Kickstarter I am currently manufacturing, its an exciting process but a lot of waiting in between submissions, proofs, and later the final products.  Thought a lot about my big game, Legends of Novus, as well but not much I could do about it on the drives.
So that left imagining up a new game...
That's where Spellbook'd was derived from.  I had the initial concept a few months ago but left it as a thought in the notes app of my iPhone.  Now it is becoming reality with card ideas, mechanics, and even a printout of some basic cards.
I've now playtested it about a dozen times and found most of it works out well, had a few wording issues and two spells to adjust, but otherwise it seems to be playing as expected.
Now it needs some outsider influence, some experienced PnP gamers are willing to give it a try so I am excited to see what they think of the initial game and where it goes from here.

Meanwhile, need to go back and finish up the Creature cards of Legends of Novus, build up new videos, and began the future Kickstarter page in preparation for early next year.  A call is planned with a mass manufacturer to see how costs and files are needed (postponed from last week).  That can really help with the planning piece too.

Here is a simple logo thrown together to identify the Spellbook'd game.  It will change for sure, but for now it helps to share an image and title with people that might be interested in it.. 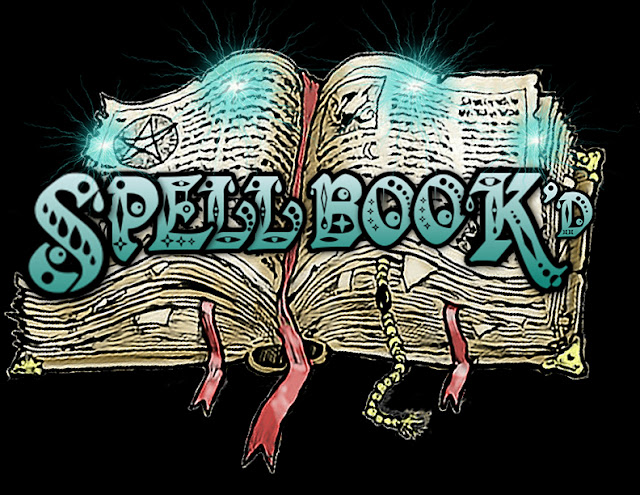