It has been a busy week, but exciting as well!
Duel of the Dragons has exceeded its modest funding goal of $500 on the third day of KS (of a 14 day campaign timeframe).  This was primarily done through unknown gamers, with some support from a few friends and family members.
Launching the KS was a little intimidating, particularly when looking at some of the amazing projects others have launched and how much they were able to raise (and their preparations with reviewers and playthrough videos also).  I feel a fairly competent campaign was created and presented to potential backers, with each of the essentials for a successful KS being present to some extent.
I launched the campaign on a Friday, which is not generally suggested (Tue/Wed/Thu are preferred), but that was my best timeframe around my day job and other life events.
I have learned a lot about the KS program, and the behind the scenes data and discussions that can take place once you have launched  I have also learned a lot about the pressure to keep a campaign growing, and how challenging it can be to find ways to promote a game without delving into "spamming" or unapproved ads (on FB or other groups).
Once it is all over I will discuss the process in an essay/review of some kind and post a link to it in this blog.  Might be a while due to needing to work on final revisions of the game, manufacturing submissions, and discussions with backers as well.
The next week will continue to be full of FB/IG/Twitter ads/discussions, and the important FallCon event to demo Legends of Novus (and discuss/promote Duel of the Dragons).  It will be a great chance to meet gamers and designers in a local environment! 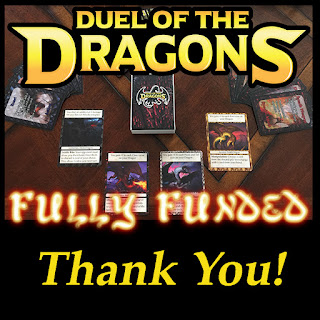