The Kindness of Strangers

One of the harder things to find, well without spending a ton of money on manufacturing, shipping, and pay to play... Is good reviews.
If you are a very new game designer, with rough ideas for games, finding reviewers and playtesters will be a challenge.  Once you have your game polished and made, it can still be tough to find people willing to get your game, play your game, videotape themselves, and give a decent review.
I am using this blog entry to tell you about John Galvin, he was an unknown backer to me on my first KS, Duel of the Dragons.  He mentioned he had a youtube channel, but didn't say much beyond that and I completely forgot about it during the production and shipping times of my game.
John actually did not get his original KS game, somehow it was lost between here and NY.  So after a few email chats I sent him a new copy of the game, this time tracked just in case it was lost/stolen again.  He got the game and had it played at a game store with a few guys.
He not only taped and showed that video, but also an unboxing video, a how to play video, a game setup video, and a review video.  Then one more video after that.
I can honestly say I was surprised by all of this, and he does it for all kinds of games that he buys/backs at no expense to the game maker and actually doesn't even tell the maker when or how many videos he is posting.  You would only know if you are subscribed to his channels and look at it regularly, or get push notifications.
So, in summary, just wanted to thank John again for the kindness of strangers.  His reviews were very positive about my first game, visually entertaining, a pretty accurate about the gameplay.  Check it out in the link below if you like: 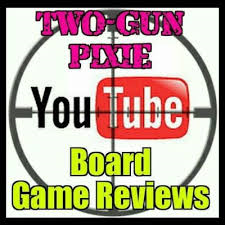